AB Klaipėdos energija (Energy of Klaipėda) is one of the oldest Lithuanian energy companies, the largest producer and supplier of district heat in Western Lithuania. Its history dates back to the year 1929, when on the riverside of Danė a new coal burning power plant was built. June 17, 1929 is regarded as the establishment date of the present AB Klaipėdos energija. This power plant still stands on its hundred year old oak beams and continues operation.

Having survived tough war and post-war years, the power plant was rebuilt. In 1959 Klaipeda was connected to the common energy system of Lithuania, a year later building of a heating network of the city was commenced. In the two decades after 1960, the city grew rapidly and the energy demand was also increasing. Vast reconstructions of turbines took place, water-heating boilers started operation, and new heating lines were built with the emphasis put on conversion to operation with fuel oil and natural gas. A new Klaipėda Regional boiler house and later Lypkiai Regional boiler were built and started operation in Southern part of the city.

After reorganisation Klaipėdos Energija has been developed into a large, successfully and effectively operated district heating supply company. In 2002, upon issuing and successfully distributing 2 million of ordinary registered shares, Klaipėdos energija became the first heat supply enterprise in Lithuania with the registered foreign capital. Now the main portfolio of shares (75.45 %) belongs to Klaipėda City Municipality, 19.47 %- to Gren Lietuva, UAB and 5.08 % is owned by other shareholders. 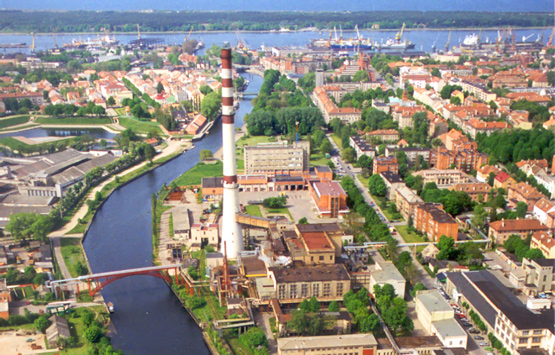 back to front page.